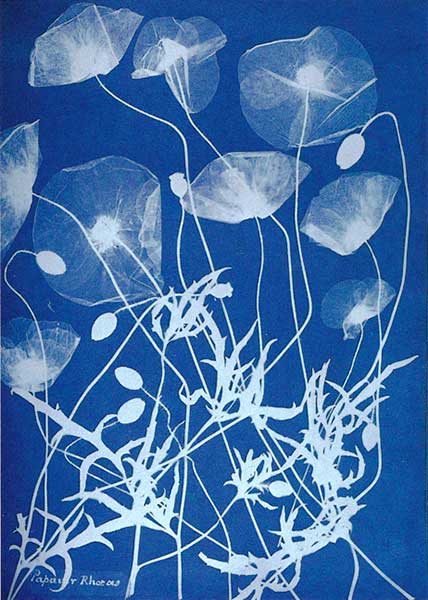 Raised by a father who was a scientist, Anna Atkins was passionate about biology and illustrated various works by naturalists. She used engraving and watercolour before discovering the photographic techniques developed by John Herschel and William Henry Fox Talbot, friends of her father.

In 1843 Anna Atkins published a first collection of cyanotypes: ” British Algae: Cyanotype Impressions“. It is a herbarium of which she will publish twelve volumes.
This superb series is created with the technique of the photogram, that is to say that there is no negative, the plants are placed directly on a photosensitive surface, the light passes through them, and according to their thickness and the shadows projected, the prints are fixed in negative.

In the summer of 1852, in mourning for her father, she and a childhood friend, Anne Dixon, started a new herbarium “Cyanotypes of British and Foreign Ferns”. (Cyanotypes of British and Foreign Ferns).
They will publish a second opus the following year, which will see new settings of plants and feathers, an ever more artistic presentation for a book with a scientific purpose.
In 1861, Anne Dixon published “Cyanotypes” on her own.